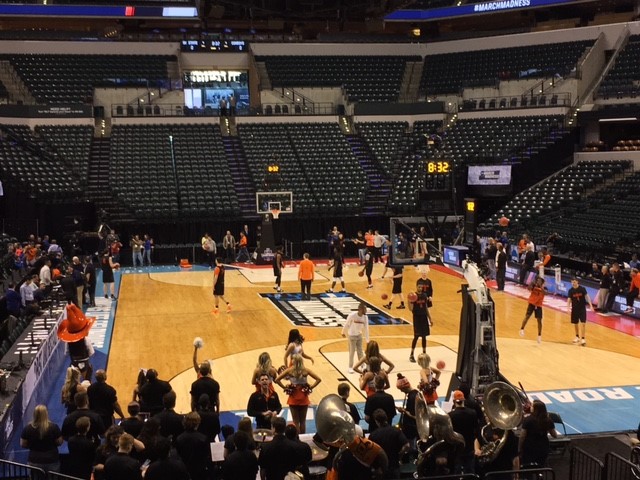 The NCAA Tournament serves as the benchmark for great tournaments. Sixty-eight teams take part in the event such as the Oklahoma State Cowboys, seen here practicing before their first game in Bankers Life Fieldhouse in Indianapolis on Mar. 16, 2017.

This past season, Major League Baseball tried something new. Due to having a shortened 60-game season, the league expanded its playoffs to include 16 teams instead of the usual 10. Once it was all said and done, MLB’s commissioner, Rob Manfred, said that the league may move to expand the playoff bracket in the near future.

This all does spur a question. What is the best playoff system? In the U.S. alone, most of the major sports leagues have different systems, with the exception being the NBA and NHL sharing a similar one. Ranging from four teams to 68 and from single-elimination to best-of-seven, finding the best postseason format is no easy task.

One of the most famous tournaments in the U.S. must be the NCAA Men’s Basketball Tournament. March Madness is known around the globe and pulls in fans for three weeks to see the single-elimination bracket of 68 teams get whittled down to a champion.

In an article by ESPN, the massive popularity of the tournament is examined. The NCAA Tournament has an interactive element when fans fill out their bracket. Instead of a game or two on a given night or over the weekend, the tournament boasts wall-to-wall action, including a stretch of 48 games over four days. Once the upset element is thrown in as well as its growing international presence, it is clear to see that the NCAA Men’s Basketball Tournament truly has just about everything.

The problem is that there are no professional sports leagues that could try anything like this. March Madness features more than double the teams than professional leagues have. A pro league cannot match the upset element when a small school beats a Goliath, which is one of the high points of any NCAA Tournament.

So how can other leagues try to generate excitement with their playoffs? One method is becoming abundantly clear: the more teams, the better. MLB’s 2020-only playoff format exceeded expectations and now many want it full-time. This year, the NFL expanded to a 14-team playoff from 12 teams; the NBA and NHL gradually increased until both had over half of their respective leagues make the playoffs.

The next considerations are whether or not to have a series and how long the series would be in an expanded playoff. A league such as the NFL will never be able to have a series as players physically could not compete much more than the 19 to 20 games that some teams play.

But in sports like basketball, hockey, baseball and, to an extent, soccer, series are possible. Baseball, in trying to find a way to make a COVID-friendly postseason, may have stumbled upon the magic combination. In their postseason, the first round was best of three, the second was best of five and the rest was best of seven. The NBA and NHL use seven-game series all throughout its playoffs, but that can lead to series going on longer than necessary. If these early series were shortened, then that could eliminate uncompetitive series going on too long while also improving the odds of an upset.

The MLB Postseason was intense from the first pitch. After the first game of the eight round one matchups, there were immediately eight win-or-go-home games. That immediate pressure situation made for some must-see baseball right off the bat. If other leagues adopted this, it would add a lot of pizzazz. For example, this past NBA season, the top-seeded Milwaulkee Bucks lost their first game to the underdog Orlando Magic. It was a best-of-seven, and the Bucks went on to win four games to one. If it had been a best-of-three, the top team in the Eastern Conference would have already been put in an elimination game, which could have been very exciting.

There is not an end-all-be-all to the issue of perfecting the playoff format in various sports. However, sports organizations can take ideas from others to build a more entertaining format. Overall, trying new playoff formats and rules will allow leagues to strike gold and find a unique tournament that fits their sport.